Last time we posted I mentioned a flurry… a “flurry” of snow.
Well. That didn’t last long.

See, we were sitting in a car, during a scene where our characters pull over onto the side of a deserted road, and in the far distance, to the left, we see a whisk of snow – this completely horizontal, seemingly self-contained gust of snow. Now, we’re in the middle of a shot, mind you. Just stopped the car, pulled the e-brake, said a line or two and got out to walk to the back and pop the trunk and then SHOOM – we’re nuked with a wall of white. Like horizontal flying screaming snow. (Picture the Smoke Monster from Lost when Ben set it loose on the soldiers in season 4) It was so cool (and beautiful) and we felt so badass walking through it.

Now, they can’t use the shot because it’s be out of continuity with the rest of the scene – and we had to race inside to let it pass – but it was a great experience.

Shooting continues to go well and the crew is awesome. We’re both really enjoying this process, and we wraped our first chronological scene in the movie yesterday and film the next two tonight. Surrounded by drug dealers in a park at night.

On a more serious note: Kyle and I have created a hard core work out plan: and I’ve learned that Kyle runs like a lunatic gazelle. Or more like a crazed old man in a pair of diapers who escaped from the retirement home and is lookin’ to go frolic with the ducks.

It’s a sight to be seen kyle fans. 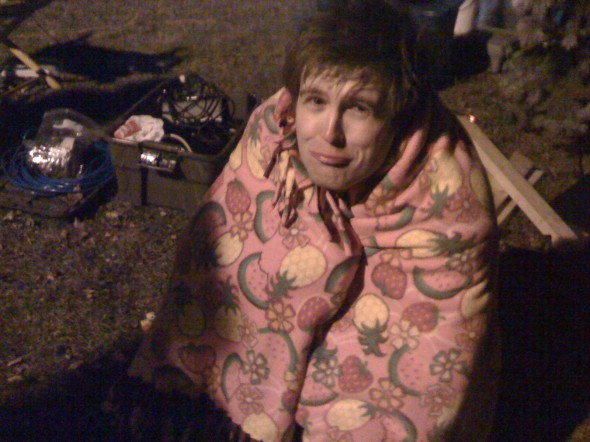